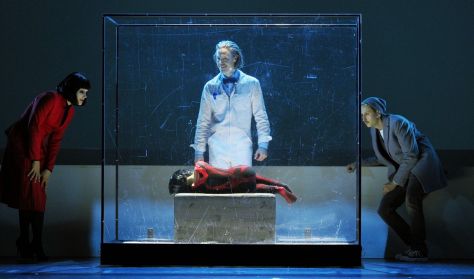 One of the most renowned composers and clarinettists of our time, Jörg Widmann wrote his first opera at the request of the Munich Opera Festival. The commission was for a piece that specifically addressed a contemporary, topical issue. Voted premiere of the year 2003 by the critics of Opernwelt, the work went on to be performed by several German companies and opera houses.

The piece, whose libretto was written by Roland Schimmelpfennig, is about an ambitious young couple, Patrizia and Bruno, who own a biotechnology company. The firm seems to be on the verge of making it big because one of its engineers, Milton has come up with the technology of cloning humans. He creates a perfect copy of Patrizia, who is even more perfect than the model, because, among other things, she can immediately recover from injuries. However, Justine, the clone, must not look in a mirror or else she would immediately realize she is but a copy... In addition to probing into ethical questions related to modern technologies, Widmann’s opera also presents a compelling emotional drama as Bruno and Milton become rivals when both fall in love with Justine.

For the excessive use of sound effects, we do not recommend the performance for those with epilepsy and other conditions with sensitivity to sound.

This performance of the Liszt Fest is presented by Müpa Budapest as a joint event with Neue Oper Wien.